A privileged environment, Madrid of the Habsburgs

In 1561, King Philip II ordered the court to be moved to the city of Madrid. The young king and his wife, Elizabeth of Valois, chose Madrid over Toledo and Valladolid. The reasons for this preference were, above all, based on practical arguments: Madrid was situated in the centre, half way between both ends of the Iberian Peninsula, it had good water and its climate was pleasant and clean.

The court arrives in Madrid

The arrival of the court led to a spectacular, if somewhat chaotic, stint of urban growth. In order to control this chaos, the Junta de Policía y Ornato (Police and Order Commission) was established, and was governed by the architect, Francisco de Mora, who collaborated with Juan de Herrera during the construction of the Escorial Monastery. This commission was in charge of aligning façades, correcting sudden slopes and eliminating any projections. 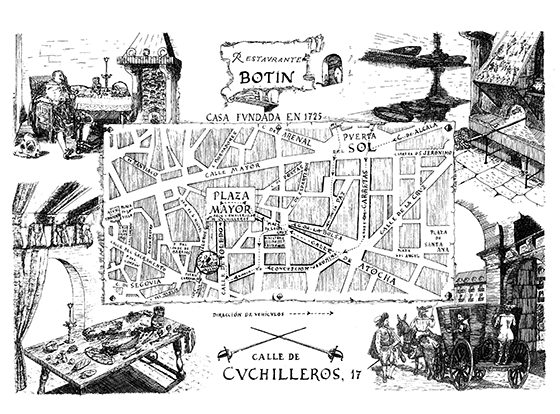 The foundations of this mythical building

Madrid continued to grow, despite the fact that upon the death of Philip II, Philip III temporarily transferred the court to Valladolid. It was precisely in this period (more specifically in 1590) that the first evidence of the building which today hosts Botín was recorded. Its owner applied forPrivilegio de exención de huéspedes (Privilege of Exemption from Lodgers), documental proof of which still exists today. This tax was paid by owners of properties with one or more floors who did not wish to host members of the royal corteges who travelled to Madrid and did not lodge at the palace or in the homes of the nobility.

“In 1606 the Court returned to Madrid and in 1620 with the refurbishment of the Plaza Mayor (previously the Plaza del Arrabal) the area became the main commercial enclave in the city with shoemakers, tanners, cutlers, braziers, and blacksmiths. The streets in the area even adopted the name of the trades carried out there: “Ribera de Curtidores” (Tanners Bank), “Plaza de Herradores” (Blacksmith Plaza) and of course “Calle Cuchilleros” (Cutlery Street). It was on one of these streets where a French cook by the name of Jean Botín arrived in Madrid together with his wife a native of Asturias with the intention of working for a nobleman from the Court of Habsburg. In 1725, a nephew of Botín’s wife,opened a small inn on the Calle Cuchilleros and carried out a refurbishment to the ground floor of the building, closing the existing arcade. Evidence of this work remains in the form of a slab at the building’s entrance which features the date. The wood oven also dates from that year and even today continues to attract diners with its tempting aromas. 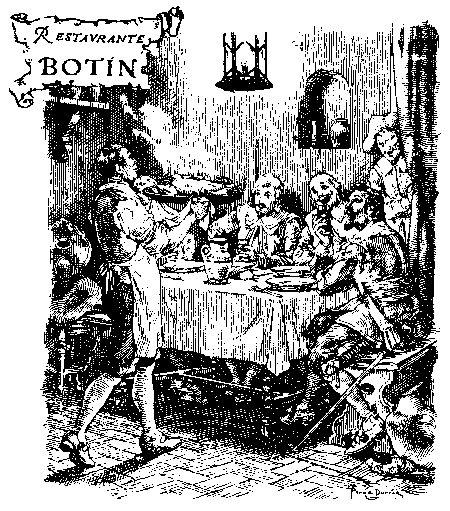 An interesting fact is that until well into the 18th Century it was forbidden to sell meat, wine and other foodstuffs as it was considered an imposition which would jeopardise other trades. As a result, you could only serve what the guest brought to be cooked. From here came the legend that “in Spanish inns you only found what the traveller brought”.

During the 19th century, the ground floor underwent more renovations. As part of this process, the polychrome wooden frieze with gold leaf was constructed at the entrance, in addition to the large windows and the confectionery counter where fritters, crème pastries, sugar-topped sweet rolls and cream glory cakes are displayed. Back then, Botín was considered as a type of tavern, since the term ‘restaurant’ was solely used for the few and rather exclusive places which attempted to emulate Parisian establishments.

By way of an anecdote referring to this time, the 1987 edition of the Guinness Book of World Records stated that in 1765, the adolescent Goya was employed at Botín as a dishwasher. The same edition also names Botín as the oldest restaurant in the world.

The González family and the spirit of Botín

With the arrival of the 20th century, Botín fell into the hands of its current owners, the González family. At that time, only the entrance and first floor were dedicated to the restaurant, with the wine cellar being used for storage and the second and third floors for the family dwelling. When Amparo Martín and her husband Emilio González took hold of the reins, Botín was only a small family business with just seven employees, including the couple and their three children.

In time of war

The dawn of the Spanish Civil War served to dash the family’s hopes of expanding the small business. Amparo and her children fled to the village of Segorbe in Castellon whilst Emilio stayed behind to look after the house, which turned into a dining room for members of the military. After the war and the terrible period immediately following it, the couple’s sons, Antonio and José, assumed control of the business and gradually turned it into what it is today. 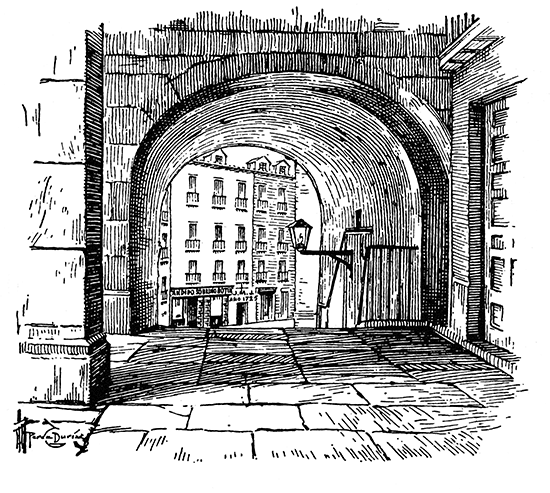 Currently, the restaurant is made up of four floors, all of which have preserved the charming atmosphere of a traditional tavern. Situated at the heart of Madrid of the Habsburgs, Botín boasts a truly unbeatable location. This is exactly why great effort has been taken to maintain the restaurant’s original appearance. A series of renovation processes have been executed to cater for the ever-growing number of customers, without changing the building’s characteristic features.

But of course, appearance is not everything: excellent customer service and delicious cuisine with top-quality ingredients take care of the rest. Botín’s speciality is Castilian cuisine, with a special emphasis on roast lamb and suckling pig. Three or four times every week, the restaurant receives suckling pigs straight from Segovia and lambs from Spain’s renowned magic triangle: Sepúlveda-Aranda-Riaza.  The lambs and suckling pigs are roasted slowly and carefully in the old wood-fired oven. Nevertheless, this is by no means intended to deflect from the other tasty dishes offered: guests can also choose to sample delicious hake, fresh sole, clams with the house’s special sauce and many more irresistible delights.

Today, the business is being run by the third generation of the González family: Antonio, José and Carlos. All of them are dedicated to achieving Botín’s age-old commitment to not only spoiling the stomachs of their guests, but also reaching their hearts for at least three hundred more years to come.